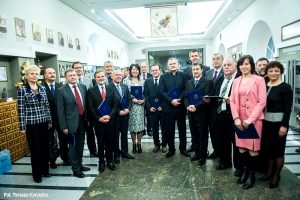 Eastern European network of universities was created in 2014.

Network consists of next universities from Poland, Gerogia, Belarus, Moldova and Ukraine:

The National University of Ostroh Academy,

The leader of the network is the John Paul II Catholic University of Lublin.

The body responsible for decision-making proces of the Eastern-European University Network is the Council of Partner, which includes university rectors.

The aim of the network is to partner in research, teaching students and linking of contacts with universities. This goal should be realized through several measures, including the sharing of international grants and research projects, exchange of scientific and research service, the use of infrastructure, implementation of joint educational projects – such as the development of international training programs, exchange of students and teachers, or the preparation and publication of joint scientific articles. Also, the aim is to contribute to the support of national, religious and ethnic minorities and organize joint cultural, artistic and sporting events.